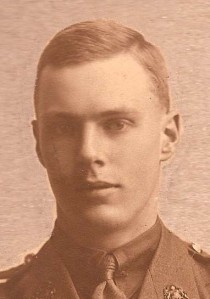 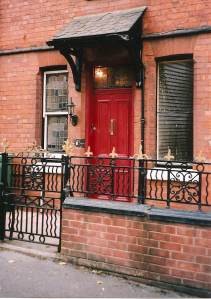 Written on old Examination Paper: –‘FOR ROUGH WORK ONLY No marks will be given for answers on this page.’ 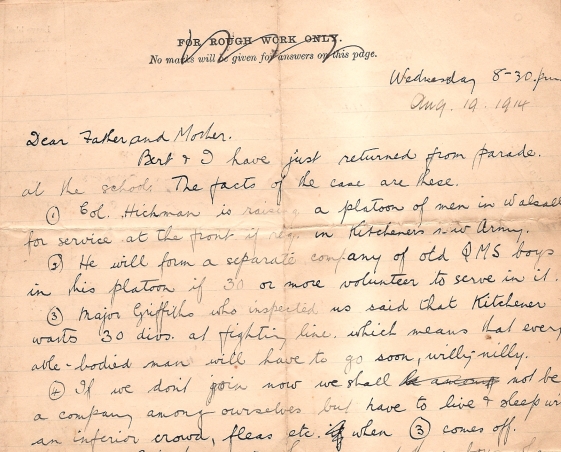 Bert & I have just returned from parade at the school.  The facts of the case are these:-

1.  Col. Hickman is raising a platoon of men in Walsall for service at the front if required in  Kitchener’s new Army.

2.  He will form a separate company of old QMS boys in his platoon of  30 or so volunteers to serve in it.

3.  Major Griffiths who inspected us said that Kitchener wants 30 divs. at the fighting line which means that every able bodied man will have to go soon, willy-nilly.

4.  If we don’t join now we shall not be a company among ourselves, but have to live and sleep with an inferior crowd, fleas etc, when (3) comes off.

5.  Major Griffiths wants the names of those boys who will volunteer for above by tomorrow Thursday night.  28 have already promised, but not absolutely definite.

7.  I think that if we all  have to join the Army sooner or later,  I might as well join now.

9.  Notice at the Works  *(2) says that all men who have been called up or volunteered for the war will have their jobs back again when they return.  No work on Mondays and Saturdays during the war. 4 days a week for all.

10. Expect to see Mr Hay *(2) on Friday to tell me about going in the Drawing Office.  I saw him on Tuesday but he was v. busy.

Will you advise me what to do;  am I right in joining this new Army?  We shall not be off just yet for a week or so.  Anyway, can I join?  The other boys, about 50, are being trained for Territorial Service, at home or abroad but not at the front.  It is very slow work it seems & they don’t seem to be very keen or serious about it.

Major Griffiths said that if you want to serve your country, the new Army is the place: he knew that he was wasn’t talking to “Ward Street riff-raff’ & so he cut out all the usual recruiting sergeant’s talk & spoke man to man.

Now do you see?  Please think about it & let me know as soon as you can.  I want to know this week.  It depends on you & mother of course.  Bert is in the Terr. Force but can back out, as I can if I like. He is asking Mr. Nightingale *(3) in the morning.

If the Ashton boys can volunteer for foreign service (not at the Front I know) I am sure mother won’t mind me doing my bit.  The Works’ Battery of Heavy Artillery now in South of England are expected to sail for Egypt soon.

I don’t think there is anything more till I see you on Friday.  A  lot of men have gone off for service:  Bridge Yard is quiet and empty – no job.  Switch Shop is nearly hung up for work & no S. Africa jobs can be sent off.

Hoping you are having a very good time – with much love

PS   Hal said on Sunday that he will still continue to go over to Sutton on Sats, have his pound of plums every afternoon & see ‘my chum’ Evans (3) every night & let other people go abroad, but you ought to see him smile.

PS  I quite see that my first duty is to you both & the country comes second. 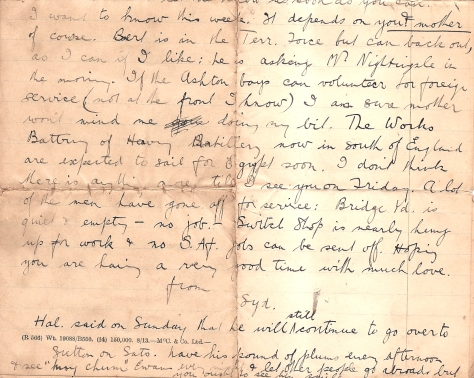 Handling Primary Sources.  Readers will approach Sydney’s letter with their own individual knowledge  about  the  First World War.  In order to squeeze as much historical fact as possible out of this source  it is important to be objective and attempt to distinguish between what Sydney actually says  & intends to say  – and what can be ‘read between the lines ‘ about his attitude to the War, to Recruitment, to middle-class  values in 1914 regarding social position, duty to parents, to the Old School and to the Country.  Few of his letters still exist but those that do can be studied for any  change of attitude as the War proceeds.

Notes: *(1) In the year 2000, I went searching for No 95, Foden Road.  No 95 till exists but the road name  was  changed when Broadway  was built.  I wanted  a photograph of the house, the door & the letterbox through which all Bertie’s Letters arrived from the Front.  We were given a wonderful welcome by the Family living there  now , despite our unexpected appearance.  Not only did they invite us into that ‘bright kitchen’ where my father longed to be,  but they gave us a lovely lunch and we talked history.