To begin with dear Mother you were the Ist to convey the news of our letters being ‘in the paper’. I mentioned the fact to Norman Cope & Cyril Hinde who are in the same hut in camp.  Norman was puzzled, he could not remember writing a letter which would be likely to appear in any paper & we all three could not think of the paper it could be in.  I thought of the Advertiser, Syd of the Birmingham Mail.

Well the puzzle was solved on Syd’s birthday I believe, or the day after, when Cope got The Express & Star.  How we roared at the large block heading & how flattered we felt.  We indeed were ignorant of such consequences on acknowledging the bacca which by the by was issued with the rations – little packets of Kitcheners and Roll Call cigarettes & a packet of Matins ‘Arf a Mo’ tobacco with a PC in each packet, having the address of the contributor.   * * * * * * * * * * 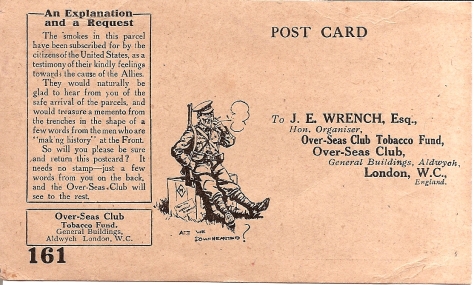 ‘An Explanation & A Request. The smokes in this parcel have been subscribed by the United States, as a testimony of their kindly feelings towards the cause of the Allies. They would naturally be glad to hear from you of the safe arrival of the parcels, and would treasure a momento from the trenches, in the shape of a few words from the men ‘who are making history’ at the Front.’   Over-Seas Club, Tobacco Fund, General Buildings, Aldwych, London W.C.

* * * * * * * * * *    Have you had my letter written on his coming of age? another racking of my brains for a real Birthday one.  If  you did I guess, or rather I am wondering greatly, what sort of opinions Mother & Father will have of me for smoking Syd’s health.  Well I have not yet smoked a cigarette & I know Dad prefers apipe.

I shall have to be a smoker now.  Miss Foster has ‘done it in’ for me.  Fancy, she addressed the parcel to me & not to Syd. Of course the contents were for us both.  Guess? – why Country Life cigs with a nice letter enclosed.

Miss Foster seems to be puzzled with regard to our ‘diggings’ – she had an idea we lived in houses.

Now look here Mum, what can you make of Mrs Jones, isn’t she TOO BAD. Why another couple of tins of Embassy & two more of Nestles.  I gave Syd a good share of one box.  Vernon, Oh Vernon – now I have smoked  a pipe on Syd’s 21st, has jokingly pestered me to smoke one of his cigs.  After tea he sais a smoke is most soothing, and at the rest, on a march when my head ached, he said a cigarette would put me all right.

Should you agree to me smoking could you please send me a white bone cigarette holder & if  you are kind enough to consider Syd too, one for him; but  perhaps he doesn’t want one.  Perhaps Harold would subscribe for a cigarette holder.  The smoking will help to keep down bad smells, by the by.  A  Lieut. passed the Listener’s Lounge & remarked upon the ‘Hum’ – ‘What is it?’ he said ‘ a cow or a horse?  ‘An awful smell to be sure!’

Vernon’s sister has sent him some lovely shortcake biscuits & a few currant cakes & some toffee all of her make & he was very generous in letting Syd & me sample some.

Your letter Mother written on Syd’s birthday was ripping, long & of course most Motherly.  I often picture you in Church alone. Couldn’t Dodger go with you some Sunday evenings now summer is coming?

Talking about Nature which goes on as usual – the war only affecting man’s work such as houses etc – on going & coming to & from from the trenches we often hear the Frogs croaking.  There must, I should think, be an innumerable number of the songsters all along the fields, especially around the stagnant ponds.

Send some lilies, as Ida promised, – the garden will be lovely if all goes on well, considering what Basil said in his past letter.

If you don’t get a letter for some long time after it was written you will know it was written in the trenches where there is no outward post until we get back to Camp.  I guess Basil will tell you when we are coming out of the trenches & the day we are going into them. Go to Camp next Monday night.

I promised Vernon I shall not smoke again until I hear what  you & Dad have to say on the matter.  We have had wet weather in Camp, but today, as I am writing this, the sun is scorching & I shall have to close now as I am getting sweaty.  I expect a letter from Harold tomorrow, for he said he was writing to me.   So Fred York* called did he? –  well I wrote to him & Harold on the 6th when I wrote those letters you were anxious about, namely acknowledging the good parcels.

It is not very often that I miss (filling) a page, but I am getting exhausted of reliable news.

Best love to all.

It was very kind & considerate of you to visit Bailey’s mother*.

My Memories of the First World War. The Revd Arthur H. Hibbett. 1967.  ‘At The Cenacle, British Red Cross Hospital, New Brighton, Berkenhead, a friend (Vernon Evans) gave me an Autograph Book in which I collected autos of the patients, written on cigarettes, which I cut in half and pasted on the pages.  I spent my time doing drawings and sketches with my left hand.’