Another repetition of having to include a Monday’s epistle with a Sunday’s.  If I had managed to get a green envelope yesterday the 1st part of this letter would have gone. 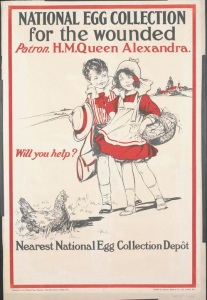 It seemed as though the letters I wrote yesterday must stay to acknowledge the ripping parcel I got this morning.   The eggs came in good condition, –  just the shells broken, but that’s all  – no mess whatever.  Hard boiled eggs seem to be in ‘great demand’ (as Miss Bore* sais) among the Soldiers.  A chap had some sent him too this very morning that I got yours.

I feel I ought to answer the parcel straight away, although I have not broken into all the lovely contents.  Oh Mummy I am in raptures again.  I guess you are smiling to know that your effort in sending such good ‘stuff’ has been another good success.  There was some crossings out on Dad’s address – how dare they spoil such neat writing,  but I got it safely.  I shall have to write another letter shortly to say how I enjoyed the ‘assortment‘ – you have good taste for biscuits, they are fine.

I was amused at the Whitby Heather scent  – after sending the Whitby Heather soap.  I guess Dad twitched a smile when he got to know you were sending me scent, but I was sincerely delighted with such a sentiment.  Mummy & Champion’s doing I bet.  And I was doubly glad on getting a handkerchief & more so being khaki.  I intended getting one with my next pay if I get any.  I needed a hankie so.

I was very happy indeed to see Dodger’s few words & promising me a letter.  I guess he was writing it for me when I was writing to him, this letter enclosed yesterday afternoon.

I have already bought a few apples, I think fruit will do me good.  Poor Sydney again.  I was rather or felt  glad now that he kept Mrs Hurst’s parcel & shared the contents with ‘Brewin*’.

I enclose Sydney’s very, very nice letter. It is isn’t it? eh what?  I want you & Ida to try and persuade Mrs Hurst* not to trouble about sending another parcel to this address.  You may think I’m mercenary, for being inclined to expect another as Sydney had the other.  As Sydney sent me her lovely letter I must write back, but if I were to tell her myself not to send me another she might take it as an insinuation – at least I do.  And you can tell Mrs Hurst it was very kind indeed of her to offer to send me The Graphic (1) . Of course now that I am out of Hospital where I got reading matter I could do with something to read, but I leave that to you.

Now when our Company Sergeant Major* went on Home Leave (sergeants 1st then privates) he saw you Mother – & told me so on returning to trenches. He said he was thinking of going up to you & telling you how I was, but he did not like the idea when he thought of the life out here.

Now, as you read in Sydney’s letter, he too has gone where Corporal A. Penning* is (2). But I think his death did not linger with pain, as I have no doubt Mrs Penning’s son did.  Gee* was his name, a relative of Queen Mary’s O.T.C. Drum & Fife Instructor.

I am sitting on a box in a Sergeant’s tent. I was interrupted half way through this letter by the sergeant who handed me this box & told me to go & sit inside the tent – as I was squatting in the grass just outside. It is sunny & fine but we have had some heavy rains lately.

Now I must write to Sydney.  I am glad you got a letter from him.  I told him to write to you & me & got his letter with your parcel. What a happy coincidence eh!   When I read that you are kept happy in hopes of seeing Sydney & me I do pray that happiness will be fulfilled.  ‘Put your trust in the Lord & He will fulfil your heart’s desire’ (3) and the 34th Psalm, for today – ‘The Lord delivereth the souls of His servants; and all they that put their trust in Him shall NOT BE DESTITUTE’. (4)

Best love to all,   Bertram.

PS  Oh I am glad Sydney had opened Mrs Hurst’s parcel of chocolate (see the stains of chocolate from his finger prints) sardines (they would not make my boils any better) condensed milk (he needed that to make his tea taste nice) and yes, I am doubly glad because his rations were thin & nasty. I hope he gets a Com.  You see, I told you so didn’t I –  if not then I tell you now, that he wanted me to go to Blighty.  I know the reason & sympathise with him & it is that feeling of his that makes me want to be with him, a sort of reaction.

We were sleeping in those beds last year at this time Mother although firing our course and in training.

Two pictures. Two Serjeants: one saving a Mother from further anxiety – and another fetching a box for a young Private to sit on and inviting him into his tent to write home. Such simple acts of thoughtful kindness fill me with gratitude to all those who helped my Dad cope with the disappointment of not getting Home to ‘Blighty‘ with Boils.

(1) The Graphic: Illustrated Weekly Newspaper. London. famous for centre-page illustration of the Sinking of the Luisitania, May 1915.

(3) Psalm 37.4-5.  (4) Psalm 34 interestingly is an acrostic poem with each verse beginning with successive letters of the Hebrew alphabet.