30th June.  HUMBERCAMP.  In Rest Billets. Y2 Day. The Battalion paraded at 11.30 pm to proceed to trenches to carry out operations against hostile positions in GOMMECOURT WOOD, VILLAGE and PARK.

THE HISTORY OF THE SOUTH STAFFORDSHIRE REGIMENT.

After intense barrage from our artillery, covered by smoke barrage, the men advanced to the enemy’s first line.  It was penetrated by ‘D’ Company of 1/6th S. Staffs.  Other companies were not so successful.  Intense artillery fire plastered the attack.  Intense shrapnel barrage was directed by enemy observers, as it followed our troops as they moved forward. Other small parties were able to enter the enemy’s lines but couldn’t obtain a permanent footing there. Others were held up by the enemy’s wire where it had not been so well cut. ’

‘From dawn to long after noon our men endured this awful fire, but the ground penetrated could not be held and by evening the brigade was back in the old trenches.’

NARRATIVE OF EVENTS DURING OPERATIONS ON 1.7.1916.

The Battalion was in position in the Assembly Trenches by 4.30 AM.

All waves moved forward as ordered. 2nd wave ‘A’ ‘B’ and ‘F’ Bombing Parties reached the German Front Line with very few casualties and commenced bombing in accordance with programme. 3rd wave ‘C’ and ‘G’ Bombing Parties. Only ‘G’ Party got into the German Front line.  ‘C’ party did not get beyond the enemy wire. Only two men were left, the remainder were struck by shrapnel.

Editor: Serjeant SYDNEY HIBBETT was most likely leading his platoon in the 1st or 2nd Wave. He was reported to have fallen in No Man’s Land, probably in the first half hour. Someone found him severely wounded and gave him a drop of water, but could not stay. Later in the day he was found to have died from his injuries. His body lost its identity in further shelling. It would have been a few days before it was safe to bury him where he fell, with a simple prayer by a Chaplain, and a Wooden Cross placed over him with the inscription ‘Unknown Serjeant, S. Stafford’.

4th wave ‘D’ and ‘E’ Bombing Parties were held up at the enemy wire, and retired to a hollow in the ground about 50x from the German wire. Our detail of the 5th wave was impeded by the Lewis Gun teams of the 6th South in the Old Front Line.  The Officer Commanding decided to pass them and went forward to the New Front Line, where he found 1 officer and about 20 other ranks 6th South of the 2nd wave, who stated they had had to retire. He sent this party forward, deployed his portion of the 5th wave and some of the 6th and advanced until compelled to halt owing to casualties just in front of the German barbed wire.

The left platoon of our detail of the 6th Wave report that portions of the 3rd and 4th waves 6th South were still in the New Front Line Trench and blocked their further advance during the remainder of the operation. [Ed: New Front Line Trench dug during night/s before Z Day to get troops further across ‘unusually wide’ No Man’s Land at Zero Hour]

The Officer Commanding our detail of the 7th Wave Capt. Eglington*, deployed and advanced over the New Front Line Trench, and about 20 yards from the German wire this officer was killed. No further progress of any note was made.

The 8th Wave did not advance beyond the Old British Front Line.

The Reserve Company was held up by 3 parties of R.Es in NOTTINGHAM STREET from 7.40 AM until noon, about 500 yards from the firing line.

About 5 minutes after Zero [Ed: i.e. 7.40 am] the Communication Trenches NOTTINGHAM STREET – SEDGELEY STREET – and DERBY DYKE were heavily shelled with 105 mm H.E. inflicting several casualties on the 6th and 7th waves damaging these trenches and thus impeded their advance.

Editor: Pte Bertie Hibbett was severely wounded in Derby Dyke about this time, having lost his way in the confusion of the bombing. His Walsall pal, Corp. Arthur Venables*, (killed later that day) saved his life by dressing his wound but then had to move on. Forced to tread on the dead & the dying, Bertie had to make his way back against the oncoming waves – – to the First Field Dressing Station in the Crypt of Fonquevillers Church.

The enemy opened fire with machine guns, one in FORD trench, and one in their first line parapet on GOMMECOURT ROAD on our advancing waves.

The New Front Line trench was under oblique machine gun fire from the direction of The Z till about 9.30 AM. The guns then moved and enfilade fire was brought to bear on that trench. [Ed: see arrows on Gommecourt Front Line Diagram above]

The Old Front Line and retrenchment was under heavy 77 mm gun fire during the early part of the operation. The batteries were firing from behind ESSARTS. [Ed: (Essarts, Boucres, a commune (3.3 km) 2 miles away from Fonquevillers, towards Arras].

The SUCRERIE was hit by our own shells (4.5 howitzer) about 11.0 AM. [Ed: The Sucrerie: foundation of old Sugar Factory in No Man’s Land, in front of Gommecourt Wood New Cemetery.]

About 2.0 PM the shelling of our sector diminished.

In addition to orders issued by Major Abadie* for the attack timed for 3.30 PM. I issued the following orders to the battalion.

‘Add all details of previous waves from this morning’s attack to new 3rd wave. Take forward all Lewis Guns you can find.  Instruct first wave to take all men forward they find in the New Front Line. Officers and N.C.Os must reconnoitre with periscopes all gaps in our wire and in the hostile wire so as to be able to lead the men through’.

A Diversionary tactic, to draw German troops away from  the french Army attack on Verdun, the 1/5th & 1/6th Staffordshire Regiment’s Gommecourt attack was doomed to failure from the start. On 24th June, a 1/5th N. Staffords soldier, captured & injured, gave the Germans details of the British Attack under interrogation. 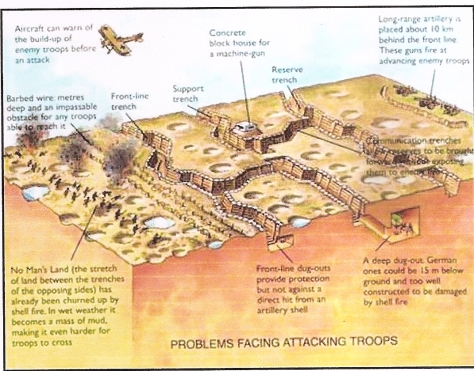 Gommecourt Village (9.3 miles from Albert) is built on ‘4 flat-topped ridges in shape of a flattened X (the ends pointing towards Essarts, Rossignol Wood, west side of Hebuterne & eastern fringe of Fonquevillers)’. The German Front Line on the north-west side of this Gommecourt Salient overlooked 2,000 yards of the British Front Lines.  British Assembly Trenches were in very poor condition from rain & shelling. Communication telegraph wires & substituted alignment tapes were cut by German bombing. Troops were impeded by smoke screen & deep mud in an ‘unusually wide’ No Man’s Land.

Germans emerged from very deep dugouts (electric light & underground kitchens) completely unscathed when British barrage ceased. Troops were caught in enfilade/ crossfire from both ‘The Z’ and the corner of Gommecourt Salient/ Gommecourt Road. Very few Staffords got beyond the wire into the German Front Line Trench. It was a very hot day.

NB: The 1st July posts have been delayed by my visit to the Battlefields at Gommecourt & the grave of my uncle Serjeabt Sydney Hibbett ‘Believed to be Buried’ in Gommecourt Wood New Cemetery.

I was delighted to meet and exchange stories with so many people on 1st July – 4th July: French , Belgian, English, American & Canadian. If there are any inaccuracies in this post I would be very pleased to hear from you. EFW. 7th July 2016.