Your letter from the Cenacle to hand yesterday. I am at present one of three stationed at an aid-post in the line (2), but of course things have quietened down considerably since you were up here. We have quite a snug little dug-out, doing all our own cooking, which is so much better than depending on a cook-house. 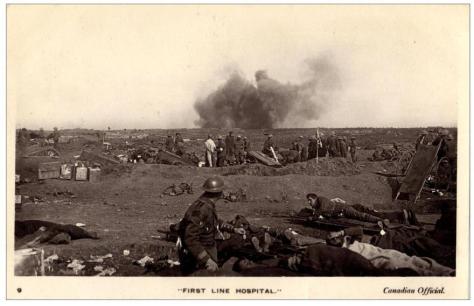 Casualties are brought down to the regiment aid-post about 20 yards from here, then we take them down to the dressing station from there.

I have not actually been stationed in the town you mention but at a hospital on the road about 2 miles towards the line. You may know where I mean.  Also at a prison dressing station (3) still further up the line.

I was pleased to hear that you were satisfied with the way the R.A.M.C. treated you out here.  Previous to operations  on the  (censored but decipherable (3)) people at home seemed to be under misunderstanding about the work of the R.A.M.C. out here but I think we are now given due credit for our work.

I gather that you were wounded in the  ?( censored) (4) so you will know that we were far from idle or out of danger there (5).

Certainly, my heart aches to be with you strolling along New Brighton Sands. It certainly is a fine spot for wounded to recuperate.

Our division has commenced leave (6) so I hope to see Blighty sometime before the ending of the war. I guess you don’t half enjoy those little concerts you have at the Cenacle (7).

I do not think I have anything else to write to you about this time, only it gives me great pleasure in being able to make a written acquaintance with you.  I am sure it gave mother (8) great pleasure in doing her little bit to get you better again.

The writer of this Letter, John Jones, R.A.M.C., was most probably a civilian doctor who volunteered for service at the Front without having to undergo extra training. He appears to be the son of Mrs M.A. Jones, one of Marie Hibbett’s best friends in Walsall. Pte Bertie Hibbett frequently mentions her kindness in sending parcels & letters to him at the Front & to the Cenacle Hospital.

John Jones is responding to my father’s request for information about what might have happened to his brother after he was reported wounded & missing in No Man’s Land. For many months the Hibbett Family hoped Sgt Sydney Hibbett might have been taken prisoner or might simply be lost in the system. ‘I see no objection to parties with Motor Ambulances searching villages in France for the wounded & to obtain particulars of the missing & convey them to hospital’. Lord Kitchener.12th Sept. 1914.

(1) R.A.M.C. Badge has the Rod of Asclepius (with serpent  symbol of life & healing) surmounted by a crown, within a laurel wreath (symbols of honour & victory) with the regimental motto ‘In Arduis Fidelis‘ (Faithful in Adversity) or ‘Royal Army Medical Corps’ in a scroll beneath.  Asclepius was a Greek Hero & God of Medicine, (<www.GreekMedicine.net>).  R.A.M.C. medics wore an arm band but carried no weapon or ammunition.

(2) Aid Post in the Line: the first in a chain of medical posts organised by the Field Ambulance (FA). The FA Bearer Division brought wounded from the Front Line Regimental Aid Post (RAP) to a Casualty Clearing Station (CCS), then on to a Main Dressing Station MDS (Tented ‘Hospital’) for treatment by the FA Tent Division. At the outbreak of war the R.A.M.C. had only 5,000 officers & men.

After the Battle of Mons, 23rd Aug 1914, when many wounded died in the chaos for lack of transport & swift medical support, (Doctor) Sir Alfred Henry Keogh was appointed Director General of R.A.M.C. & completely re-organised it.

Grateful thanks to Tony Allen for his excellent website “The Royal Army Medical Corps on WW1 Postcards“ <https://www.worldwar1postcards.com/war-wounded-and-the-ramc.php> It is full of information, well researched, clearly presented with numerous illustrations.

(3) German Wounded Prisoners: the R.A.M.C.’s humanitarian aim was to treat British & German wounded alike, according to the Geneva Convention of 1864: ‘Wounded & sick combatants, to whatever nation they may belong, shall be collected & cared for’. ‘Operations on the Germans’: i.e the Battle of Somme/Gommecourt (not medical operations).

(4) Pte Bertie’s Wound: a three-letter word (‘arm‘?) has been censored to prevent the enemy learning the effect of its shells. The R.A.M.C contributed to WW1 research into types of wounds caused by fragmentation of shells. One of these such fragments nearly cost my Dad his arm.

(5) ‘Out there’: ie Foncquevillers Church Crypt Field Dressing Station (where my father had his wound dressed & received anti-tetanus injection 1st July 1916).  If the Germans had counter-attacked the medics there might well have been taken prisoner as the FDS in the Church Crypt was so close to the Front Line.